“Yorkville University was the bridge between my small-town aspirations and my big-city dreams,” recent Master of Education in Adult Education graduate, Puneet Hayer said with a smile that stretched from ear to ear, the bright lights of downtown Vancouver’s skyline twinkling behind him. 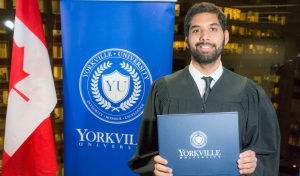 For Hayer, 30, who grew up in Prince George and spent his early adulthood there, the idea of moving to Vancouver seemed like an elusive and inaccessible fantasy. Hayer completed his undergraduate degree, and settled into a run-of-the-mill job—and was relatively resigned to a future in small-town BC, which he recognized on a deeper level, wasn’t really what he wanted. But Hayer didn’t entirely lose sight of his dream of moving his life to the urban core.  At age 27, his desire for personal and professional growth became an imperative he could no longer ignore.

With the support of his boss at the time, Hayer began to search for a master level program that would help him build on his facility for teaching. Yorkville’s Master of Education in Adult Education gave him concrete skills that he finds continuously applicable to his career, and also that the experience gave him an inclusive, plural perspective, thanks to the interactive and diverse learning community. 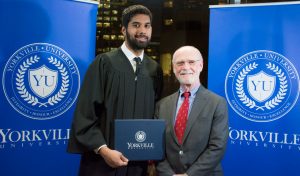 “The program was good.  It was all about making connections, and we learned collectively,” said Hayer. “It helped me in my career because I know that I have the skills to interact with different demographics.”

Simply enrolling in Yorkville Unviersity’s Master of Education in Adult Education program bolstered Hayer’s confidence, and soon after he began the program, he met the woman who would become his wife. Together, they decided to take the plunge, and move to Vancouver together. Once in Vancouver, Hayer quickly found a job downtown that he loves as an instructional designer with CIBC.