Jeff Staflund was just looking to enhance his skills, but instead, the 46-year-old, said the decision to get his Master of Education in Adult Education from Yorkville University shifted his entire career path.

“I don’t want to sound cliché, but for anyone who undertakes a Masters, it is life changing,” Staflund said.
Staflund, whose mother is francophone, is trained as a conference interpreter (English booth).
Born and raised in Saskatchewan, Staflund was living in Winnipeg in 2012 working as a freelance interpreter when he was approached by the Government of Manitoba, which was setting up a training program for local community interpreters.
“They approached me because I am an interpreter and they approached other adult educators,” he explained. “So when I got to the program I was surrounded by all these experienced adult educators.
Staflund did have some background in adult education, having spent the first ten years of his career as a language instructor, but being surrounded by professional educators inspired him to want to acquire more skills. 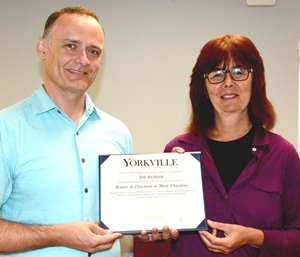 “I like learning and I like studying so I started looking around for a program that would allow me to work and study at the same time,” Staflund explained.
Online training was the only scenario that would work with his schedule and he wanted a Masters program that focused on adult education. These factors lead him to Yorkville University, but the element that cemented his choice of school was how quickly he could start the program because Yorkville University has multiple start times throughout the year.
“I didn’t expect to start as quickly as I did,” he said with a chuckle. “I started looking for a program at the beginning of April, thinking I would be ready to start in the fall and I ended up starting in the spring intake.”
Staflund set out working freelance and studying at the same time when he came across a posting for a job on the other side of the country. Coincidently the job, with the New Brunswick Government was in Fredericton, where Yorkville University is headquartered.
“This job in New Brunswick working as an interpreter for the government came up and I thought I would sign up for it, go through the interview process and see if I’d make it,” Staflund explained.
When he made it to Fredericton for formal interviews Staflund said he learned that a big part of the position was training court interpreters. Staflund said he felt it was a perfect opportunity because he could apply what he was learning in his Master of Education in Adult Education to this new role.
“When I told them that I was working on my MEd their eyes lit up,” Staflund said. “So I think it helped me out to get the job here for sure.”
Staflund was awarded the job of Chief Interpreter with Government Services in New Brunswick, so midway through his program at Yorkville University; he packed up and relocated to the east coast. He has lived in Fredericton, New Brunswick for the past year and a half.  Throughout the life change, Staflund continued his online studies and graduated at the end of April 2014.
“It is a really good program and it is challenging and interesting and relevant,” Staflund said. “I have a masters (in conference interpreting) in another field and this masters far out-shadows. I got a lot out of this program.”
He said the professors let students tailor their studies based on their individual work and needs.
“It wasn’t theoretical centered, it was very work centered and very relevant,” Staflund said. “I had a really good experience.”
The most useful of the exercises during his Masters, Staflund said, was the final project, which involved pulling together everything he had learned: evaluating learners, program planning, theories of education and more.
“The final project was like giving birth, you had to pull all this stuff together in a cohesive project, but that is where I really saw the benefit of everything I had learned.”
Staflund’s final project was an action research project where he looked at a problem in an educational setting and he did research to resolve that problem.
“My issue was I had just gotten this new job in Fredericton and was given responsibility of the training program of court interpreters, but I didn’t know if it was an effective program,” Staflund explained. “So my action research project involved going out an interviewing people, assessing teaching materials that were already there.”
He looked at what was working in the training program, what wasn’t working, and developed suggestions of where to take the training for court interpreters.
Staflund said he is considering taking his education to the next level and completing his doctorate in education in the near future.