Rima Al Tawil has become something of an expert in the theory and implementation of communication strategies in online learning and has found her calling as a senior instructional designer. 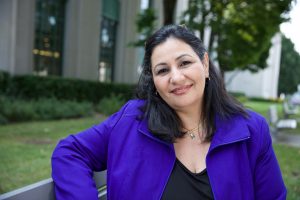 “I know that whatever ideas I share will reach a multitude of people across many different cultures.  To be able to exchange ideas with people who are of like minds, yet also from different walks of life really broadens my perspective,” said Al Tawil, a graduate of Yorkville University’s Master of Education in Adult Education, about her work in education design.  “What I’m doing right now is so interesting.”

Al Tawil, a mother of four children, is a former school teacher. “I started my career in education, but somehow changed gears and I became a corporate trainer,” she says.  “I found that I needed to have the theory behind my practice, and I thought, ‘ok, I have to kick it up a notch.”  She was already working in the field of adult education when she found Yorkville’s Master of Education program.  At first, though, she found online learning to be a challenge. “I actually wasn’t very open to studying online in the beginning,” she admitted.  “I felt like I needed to be there, present in class because I needed that social interaction. I hadn’t taken any online courses before.”

With persistence and determination, however, Al Tawil soon found herself becoming accustomed to a new way of interacting, and learning.  Eventually, she found her community, virtually. “The beauty of the process is that the professors actually taught me how to study and to communicate online,” said Al Tawil. “We had this social interaction that I never thought would be possible in an online course.  I had actual friends, colleagues and classmates all over Canada.  My closest friend lives in Saskatchewan, and another lives in BC.”

The Yorkville program also allowed her to schedule her studies around the needs of her family.  “When I started at Yorkville, my eldest was nine years old and my youngest was four.  “I really had to go and sit at the Starbucks, or the library or community centre for five and six hours, and to physically be out of the house—I had to go to a place where I had access to the internet without being disturbed, because to my kids, if I was at home, I was at home!” She laughed. “But it’s worth it.  Getting my Masters was certainly challenging,  but the instructors were awesome—so supportive.  Especially when it came to taking extra time for an assignment, or if I needed additional explanations, they would understand if sometimes our other priorities took precedence.”

Al Tawil now works for an international company, with almost 8000 employees, and is thriving in her position.  “I create the content which will be translated into French and Spanish, and may be shared all over the planet,” she says.  But she hasn’t ruled out the possibility of getting her PhD one day.  “I said to Rita Kop [Yorkville University’s Dean of the Faculty of Education] that I hope [Yorkville] offers a doctorate program, because I would be the first one to sign up,” Al Tawil said with enthusiasm.

“I’m not sure if I chose Yorkville, or if Yorkville chose me.  But to be honest with you,” said Al Tawil. “I discovered that studying online through Yorkville gave me more education than anything I’ve received before, even face-to-face, at any other school.”