King, a Bachelor of Interior Design student, was announced as the only Canadian winner during the IDEC’s annual conference in Charlotte, North Carolina on March 9. 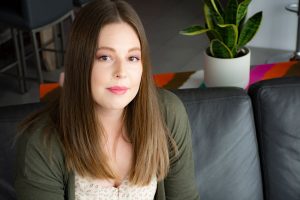 Program Coordinator Amy Bagshaw said King’s big win is “not only indicative of her talent and hard work,” but also speaks to the nurturing support she was given by all Yorkville University faculty who worked with her – namely her mentor, Head of Studio Penny Fobler-Cressy.

“We are so pleased to continue our program’s strong winning streak at IDEC…and to be involved in worthy projects that shine a light on the possibilities of social change within Interior Design,” Bagshaw said. 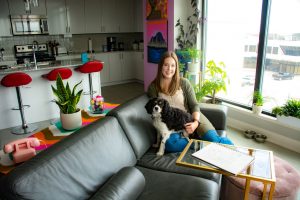 This year’s IDEC Student Design Competition tasked student competitors with designing a small vocational facility to serve as an educational and training space for individuals with Autism Spectrum Disorder (ASD) and other varying cognitive abilities.

King, who believes exceptional design is often driven by a social need, said she felt inspired to go above and beyond with her submission for the international design competition.

“I feel proud. I put a lot of hard work into this and it is really nice to be acknowledged for that,” King said upon being named one of the competition’s regional finalists.

The IDEC Student Design Competition is a prestigious annual design competition open to graduate and undergraduate students from across North America. Projects are judged according to their adherence to the requirements of the program set out by the IDEC along with creativity and sensitivity to the population occupying the space. 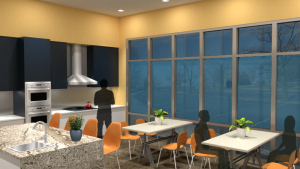 During the research stage of creating her design, King met with the program director of a vocational facility in St. Johns, Newfoundland, where King is from.

“(The director) gave me a tour of the facility and a rundown of what happens there,” King explained. “She told me what was working and what wasn’t working in the facility and I was able to apply that to my research. I was also able to meet some of the clients and see how they interact and what they need in a physical environment.”

King said she found the experience inspiring, in large part because that facility was originally built for offices and retrofitted.

“[The building] isn’t really suited for what they are doing,” King explained. “Just listening to their experiences and the things they have done to try to make the environment better was really insightful and I was able to take that and run with it.”

King’s design concept was inspired by Kintsugi, the ancient Japanese art of repairing broken pieces of pottery with lacquer and gold embellishment over the seams, transforming something damaged into an object more beautiful for having been broken. King explained that Kintsugi is a philosophy that speaks to human perseverance and echoes our ability to rebuild ourselves after a tragedy, learn from our mistakes and become better, more enlightened and ‘beautiful’ beings than we once were. 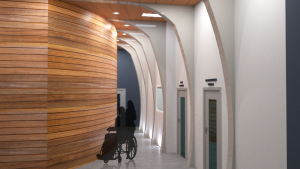 “It sheds light on the paths that connect each portion to the whole and celebrates the unique history and characteristics behind each piece of pottery,” King said.

“This room is an escape room,” King said of the sensory integration area. “So, if [residents] are feeling overwhelmed, they can go in this room and it is very deprived of sensory stimulation. There are bean bag chairs, a vestibular swing, storage, weighted blankets, headphones and access to a garden. 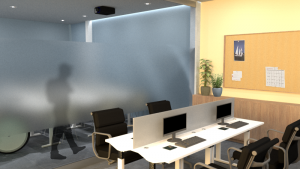 Although when she initially enrolled in the Bachelor of Interior Design, King thought she would do residential design and then she thought of focusing on hospitality, but this project has her thinking more about specialized projects.