Anthony Rumolo’s goal is to make a difference in the lives of others and he is certain the skills and knowledge he gained in Yorkville University’s Bachelor of Business Administration (BBA) will help him do just that. 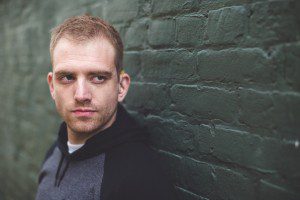 Rumolo, who graduated from Yorkville in 2015, is the founder of the Ontario Deaf Hockey Association. Rumolo himself has a 90 per cent hearing loss since birth and he founded the organization after he was introduced, in 2011, to an entire world of sports enthusiasts, leagues and organizations dedicated to people with different abilities, which he hadn’t known existed. After realizing there were so many talented athletes who were deaf or hard of hearing, Rumolo decided he needed to work to help raise the profile of these athletes and inspire new athletes.

The Ontario Deaf Hockey Association began at first as a simple Facebook page and then he built a website. They then launched a shinny league in Oakville, Ontario with games every other Saturday. Today, the Ontario association has the highest number of enrolled deaf / hard of hearing hockey players in the country.

The dream, Rumolo explained, is to advocate to see deaf hockey included in the Paralympics and to eventually see a member of the Ontario Deaf Hockey Association in the National Hockey League.

“The main goal is to showcase the players who are deaf and hard of hearing so that one day they will be established and recognized that because of their skill they can make it to the big leagues,” Rumolo said. “We haven’t had a deaf hockey player in the NHL since Jim Kyte.”

He hopes he can also grow and register the association as a not-for-profit to help grow its reach and profile. The Association is self-funded through sponsors and private donations and is run entirely by volunteers. 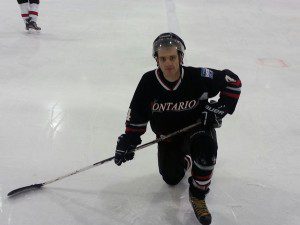 On a personal level, Rumolo said wants to eventually build the association to a point that he could focus on it full time, as his career. In order for him to grow and continue towards his goal, Rumolo decided to pursue a business degree and settled on the BBA at Yorkville University.

“I really like being involved with making a difference, so if I can have a career that would allow me to make a difference for other people. That is my goal in life and I believe my degree is not just a piece of paper, it has actually given me the tools I need to be successful,” Rumolo said. “I want to use those skills I learned in a business that I am passionate about.”

In addition to running the association,Rumolo currently works as an agency sales representative at West Jet and he worked extensively as a background actor in television and movies.